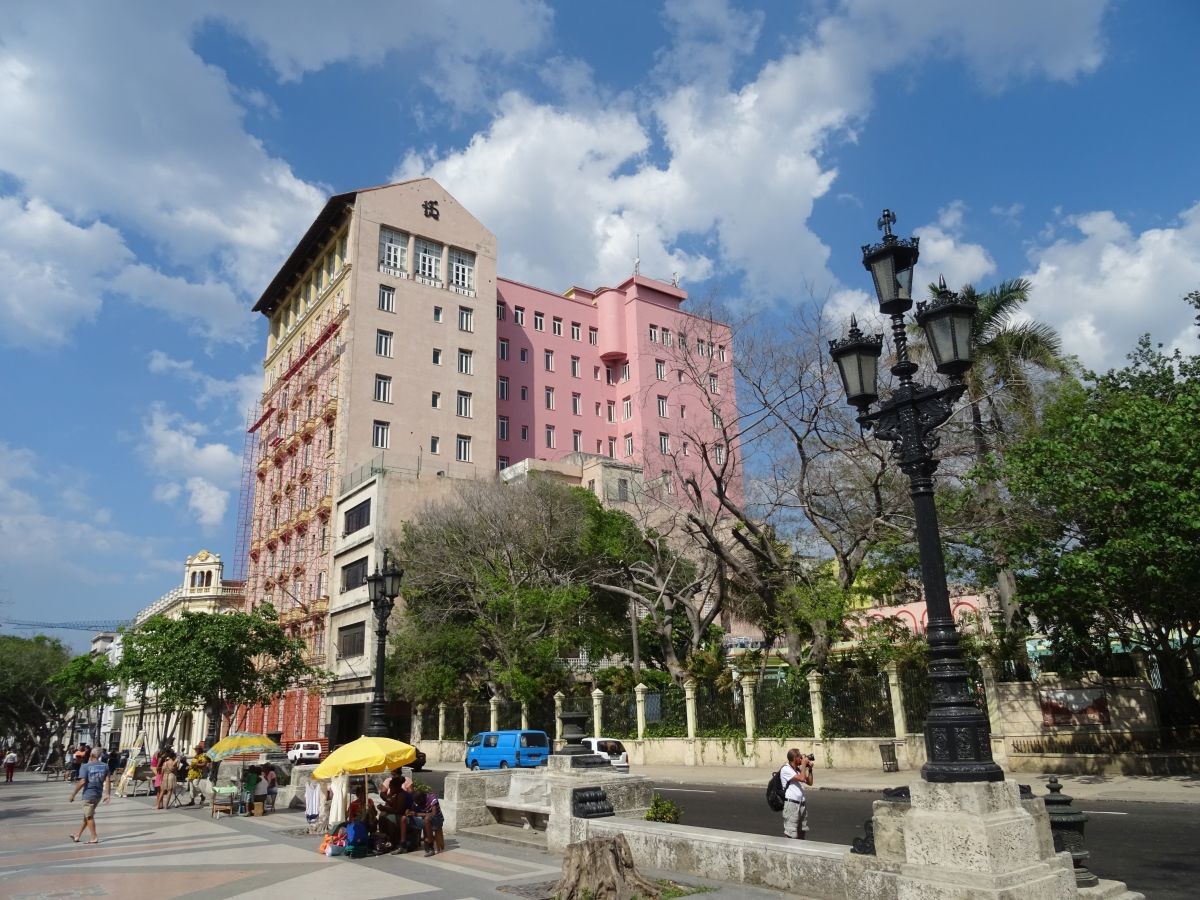 Hotel Sevilla Havana Cuba is part of the Mercure brand, under the French Accor chain. If you ever go to Havana Cuba, then make sure you vist this hotel. It is a truely hidden gem. I stayed at the Sevilla for eight of my nine days in Havana during the Rolling Stones travel March 2016, and that was my third stay at the Sevilla since 2000. It is still my number one Havana choice, and I will return to Havana Cuba and the Sevilla some day for sure. Even if you just do a day visit, make sure you enjoy this great originally Biltmore branded hotel, where once Al Capone and a bunch of other well known names used to hang out, before the revolution that is.

My first visit to The Sevilla was in 2000. Then I did not expect that much from a hotel, and I loved the colonial style, the lobby bar with an open view to the sky with the stars in the night, and the top 9th floor restaurant with a view of the entire Havana city. When I returned for my visit in 2016 I felt the room was tired, that is true, but after a few days I got the same feel of being “home” as I get in any great hotel with excellent service and facilities. I never spend time in the hotel room anyway, except when I work, and I did never work in Havana.

For the last night of my Havana stay the Sevilla was fully booked, so I had a booking at the nearby five star Hotel Saratoga, one block from the Capitolio. This is the same hotel as The Rolling Stones stayed at for two short days during the Cuba travel. The Saratoga is modern, exclusive, they have free internet for all guests everywhere, and a rooftop pool, but I did not get any feel of the hotel, it is just a boring business hotel, no kids in the pool, no normal tourist people, just business dressed people, high priced.

For other hotels in Havana there are many old style hotels worth trying out in the old city center, like the Telegrafo, The Inglaterra, Ambos Mundos and so on. Also, at the end of 2018, there will be a new and probably very exclusive five star hotel right at the corner of the Prado and Malecon, as I saw Sofitel were just in the beginning of building a new hotel there, also part of the Accor chain. And if you just want to stay at a big tourist hotel, then Melia Cohiba and Melia Habana are great choices. Finally, next time I go to Havana I think I will book three nights at the Hotel Nacional de Cuba – another classy hotel, where parts of the Stones crew stayed during the 2016 show travel to Havana.

On the last day of my stay in Havana I just walked around and made some photos of my favorite places. These pictures are from the Hotel Sevilla, the top floor restaurant, the lobby bar, the poolside restaurant, where they actually had Internet, there were always musicians around playing music, and as the days went by at the Sevilla, I felt more and more at home. It is a bit tired, so true, but unless you are a snob, you will love the Sevilla. You may book the Sevilla directly from the Accor Hotel Chain web site, or you may book it via the Cuban travel site Cuba Travel Network.

The “Christ statue” photo is taken from the rooftop Bar Habana at the Sevilla with a zoom. The Prado is just outside the door of the Sevilla, and many weddings are just across the street, so you have entertainment and happiness every day. On Saturday they were exhibiting art for sale on the Prado. For sure The Hotel Sevilla is the best place to be if you love to be where the buzz is in Havana Cuba, right next to the Paseo de Prado, and just a few blocks walk down to the Malecon! 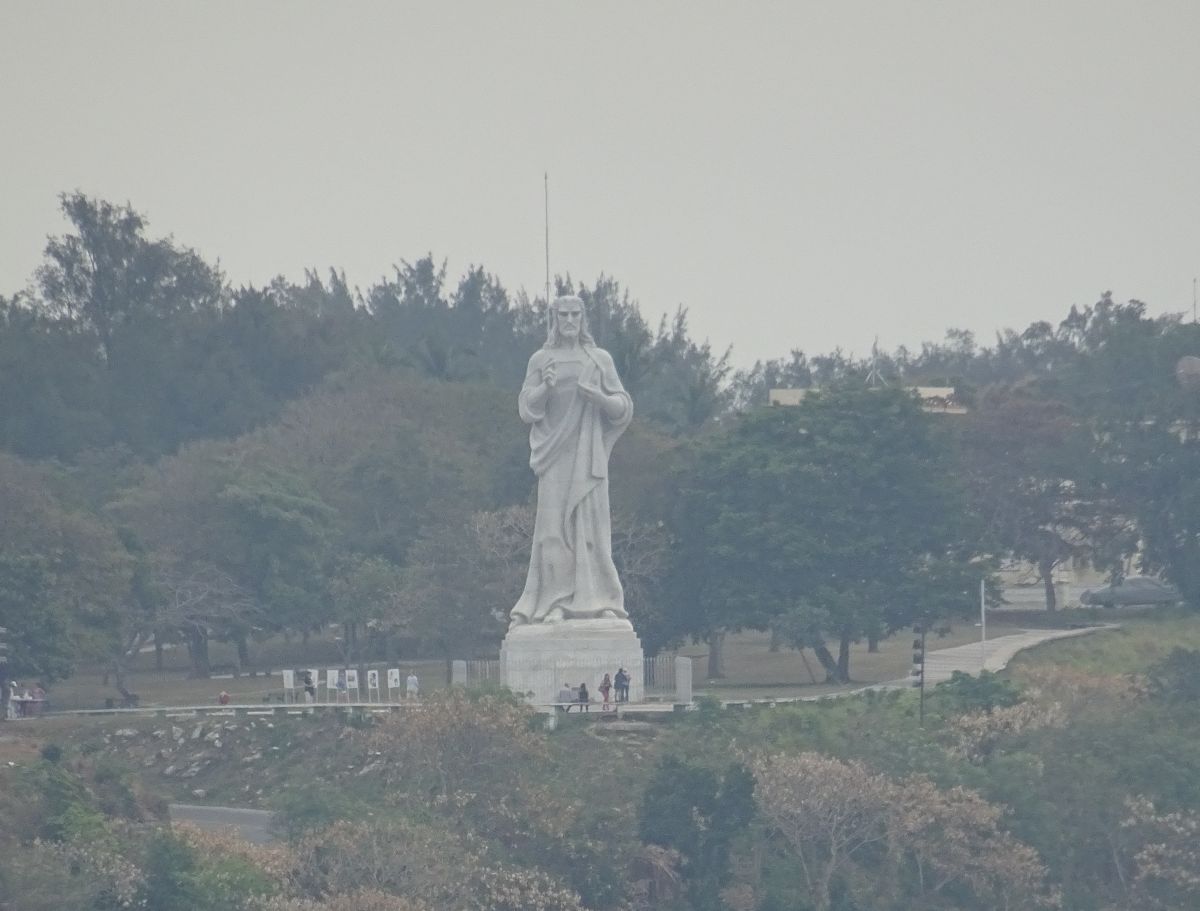 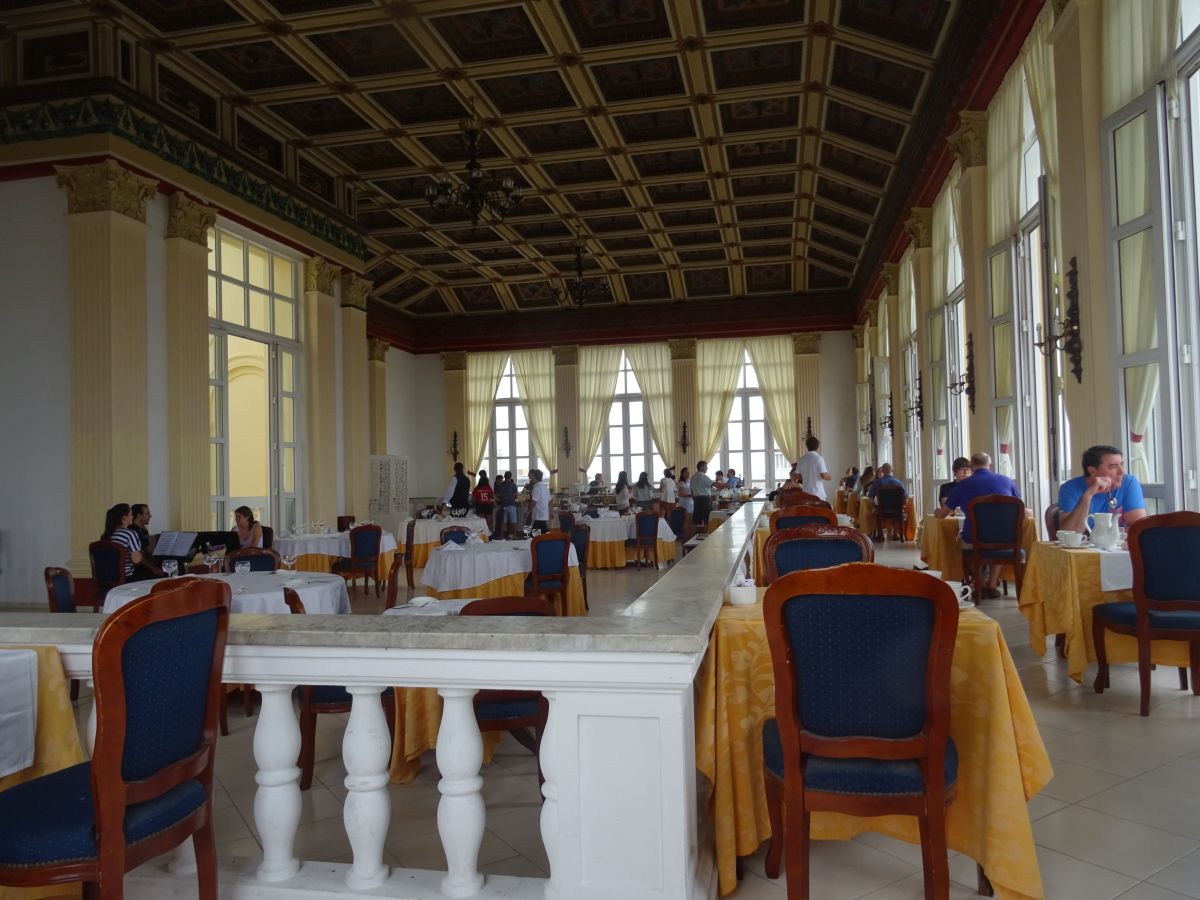 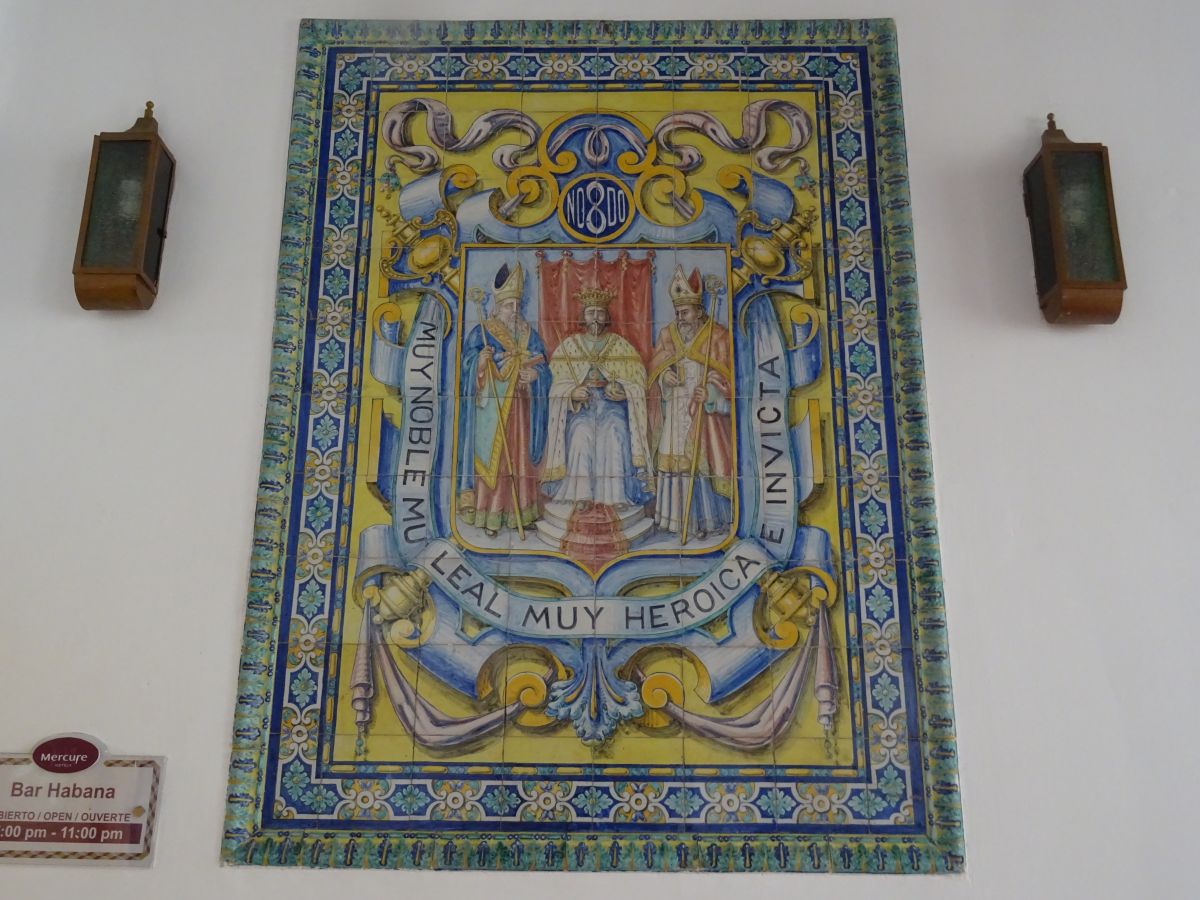 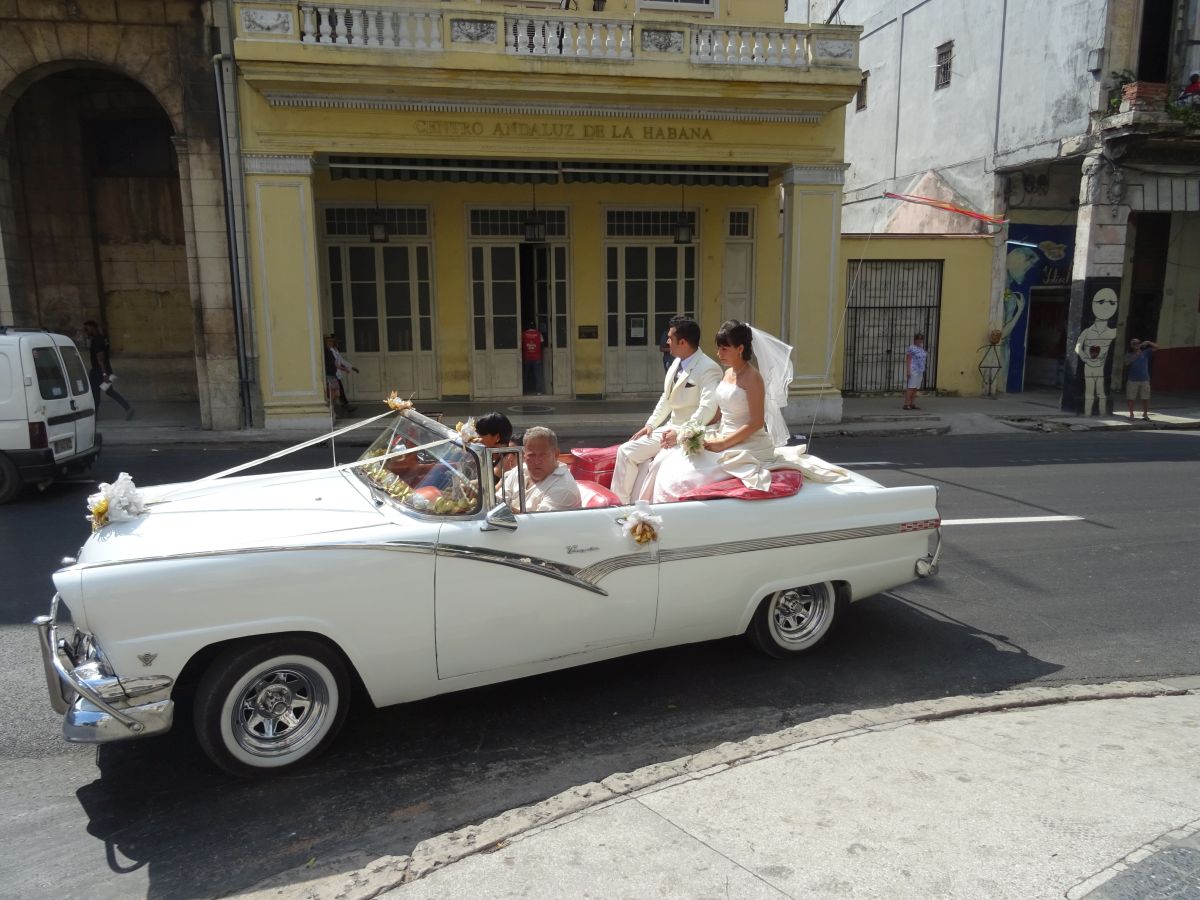 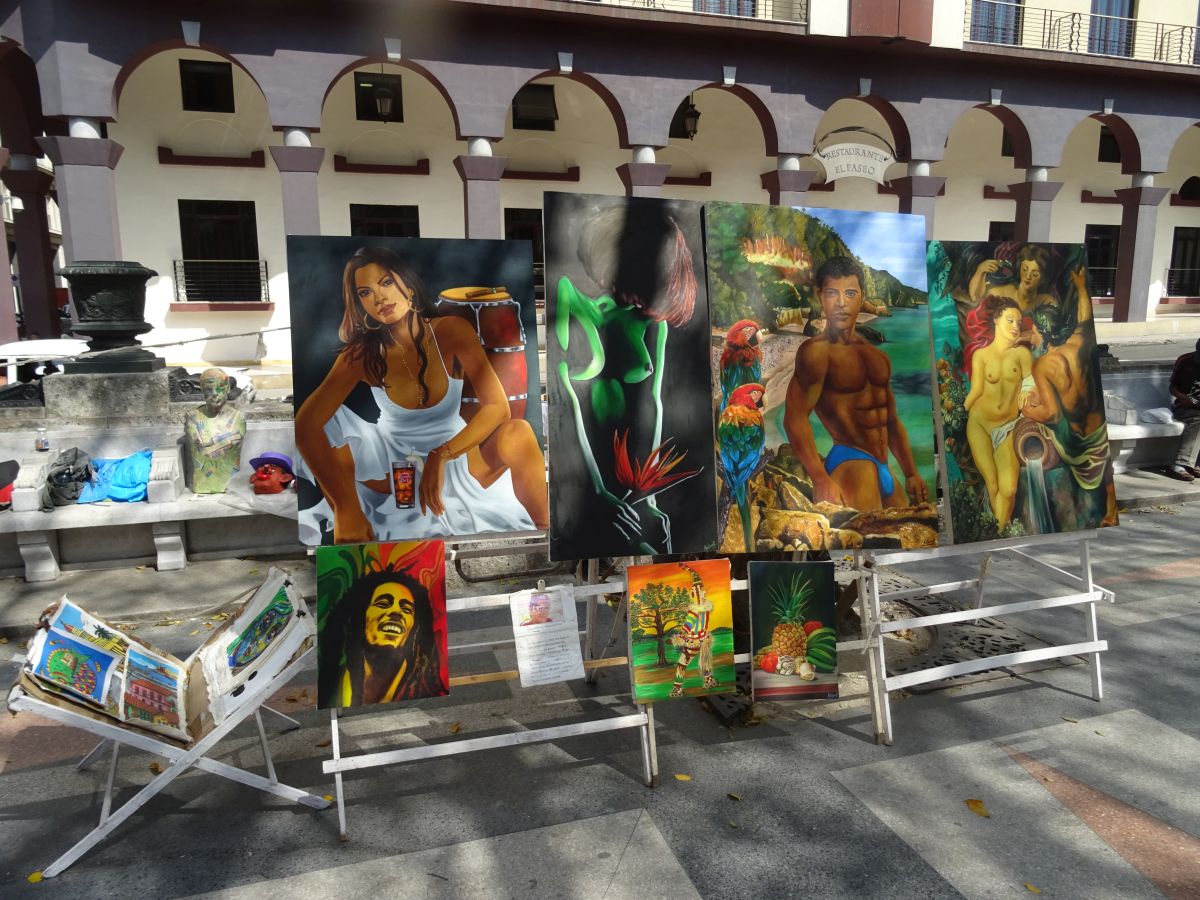 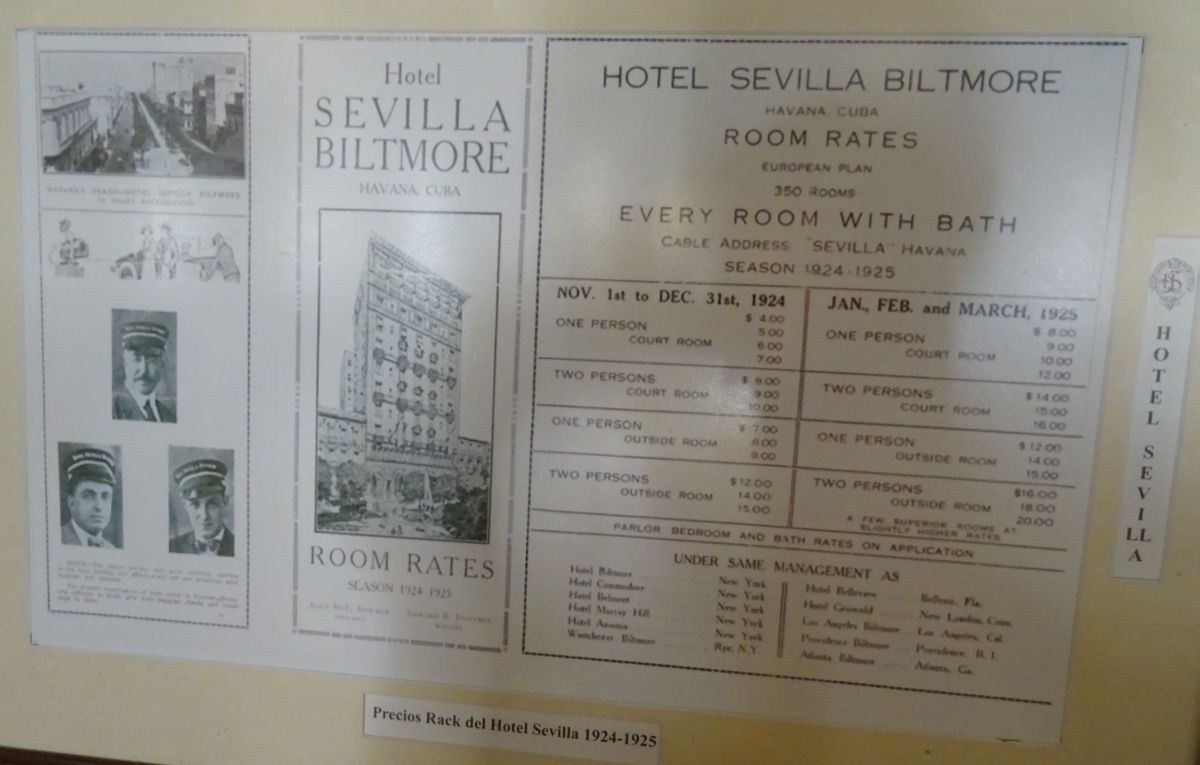 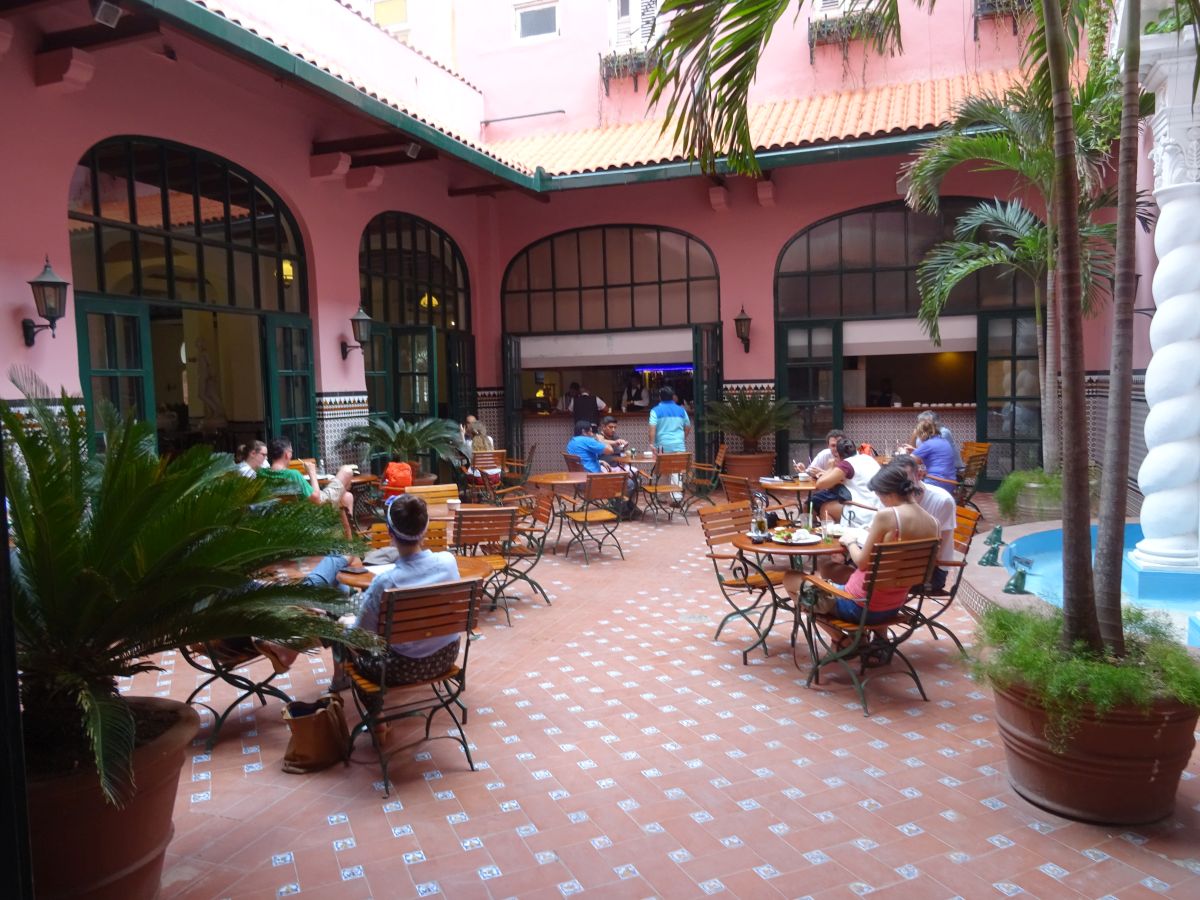 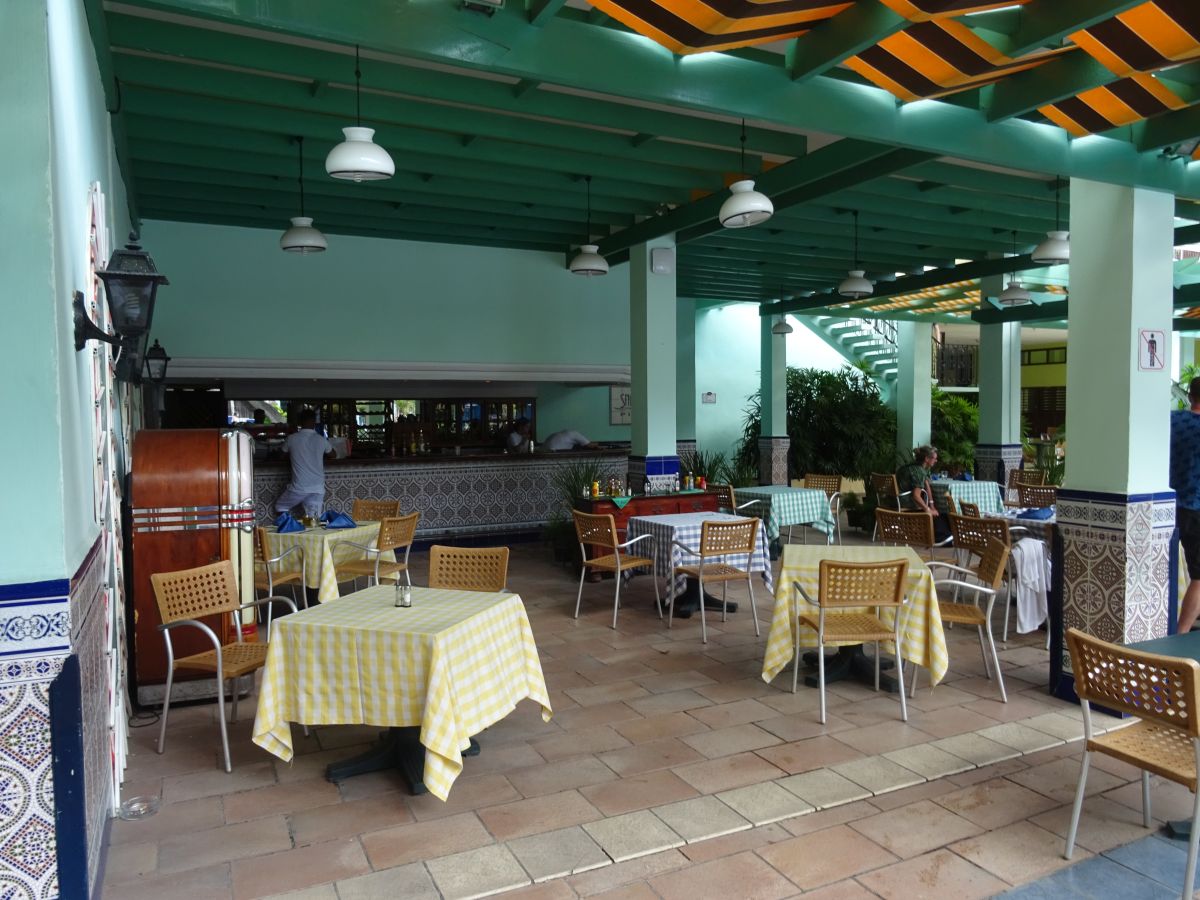 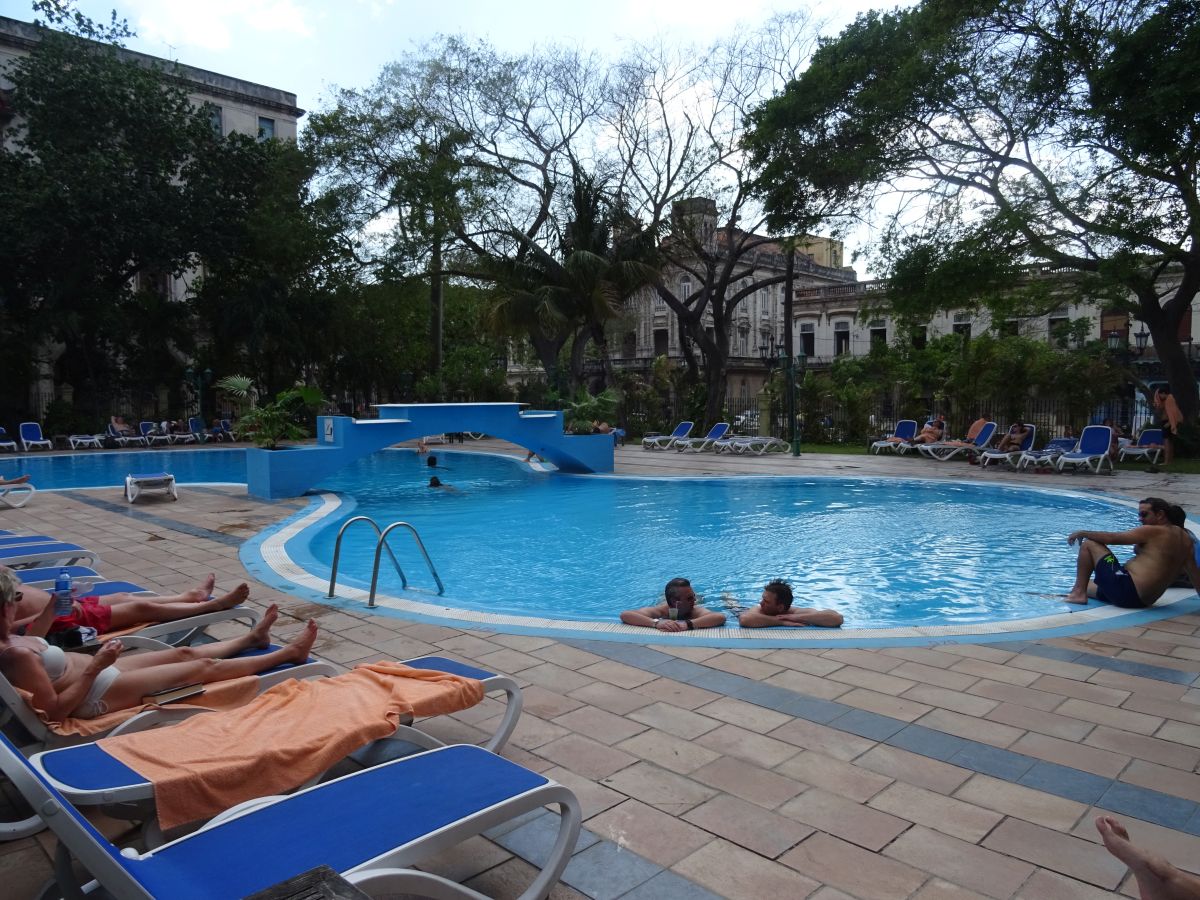 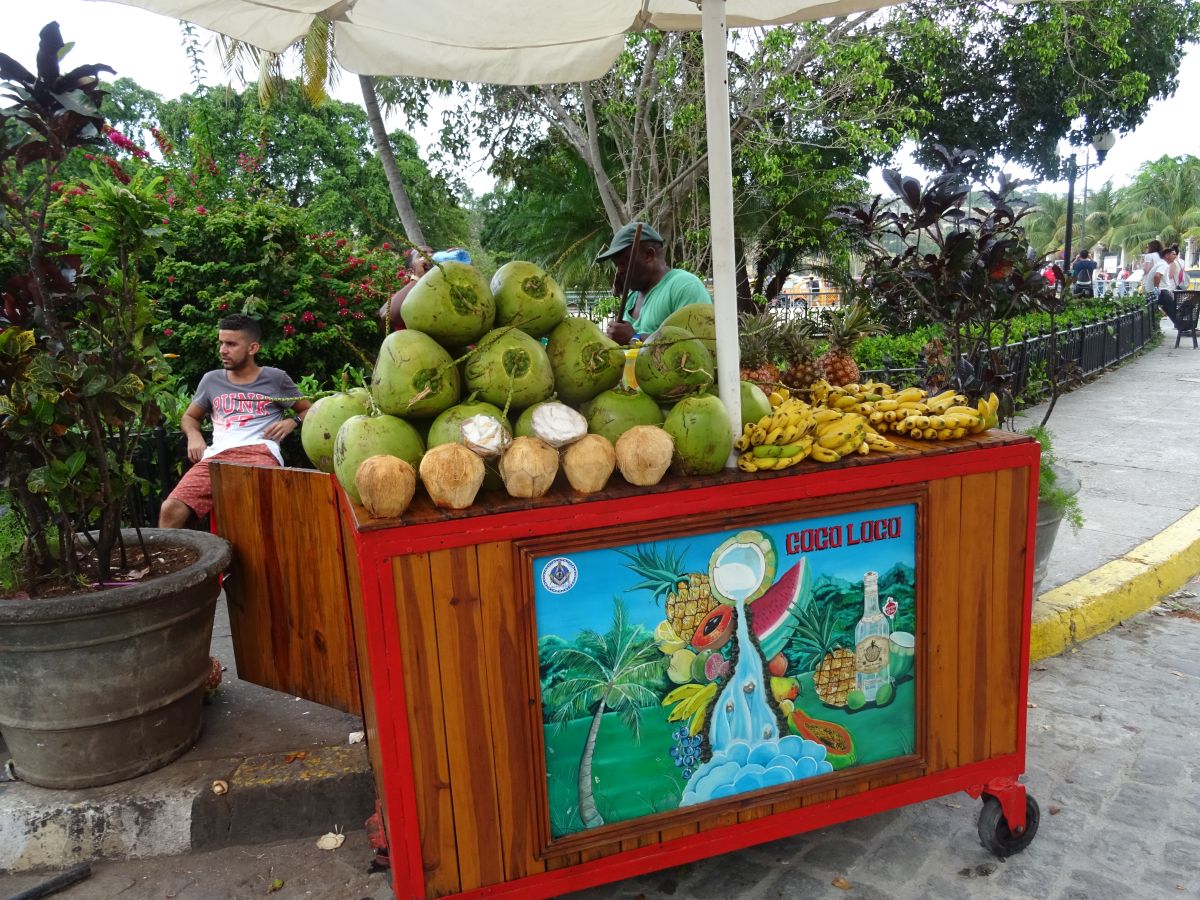